*Possible Spoilers!* I did not have anything to do with the creation of the movie, I am just purely writing some observations*.

I finally got to see this movie and I really loved it! Dracula Untold is based on the story of Dracula. Except the difference is here it shows how “Dracula” become the monster. Something that I previously had no idea about, I had always heard about what happened with Dracula after the fact. I knew bits and pieces, I knew that the moment that pushed him over the edge was the death of his wife.

Without giving too much away, I really enjoyed this movie. It was one of those movies though that seemed to go quickly through one part and slowly through another without really a specific reason why they seemed too focused on one part. For example, where Luke Evans actually turns into Dracula I felt that it went far too fast for such a pivotal part. I felt like it was a movie that could have done better off it had been longer. Maybe not an epic movie, but it definitely needed to be longer than it was.

The acting was awesome, I have had such a crush on Luke Evans ever since I saw him “The Three Musketeers 2011“. I think he has an air of old Hollywood about him. Dominic Cooper (think Mama Mia, Captain America) plays his enemy, and plays the bad guy extremely well. You completely don’t like him and have no sympathy for him, but his last scene was another part that I felt needed to be more spectacular.

Expect to be intrigued in this movie, I wouldn’t say that it will blow your mind. You will be interested though, you won’t notice the time that has gone past. 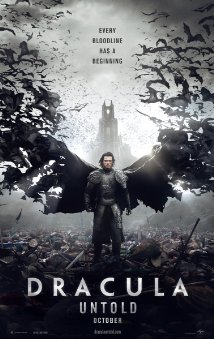