I am SUCH a Sims fan!!! Apart from maybe Guild Wars 2, it’s the only game I can sit and just play for hours…and then today on Facebook…I saw this!

I am SO excited! I have been playing the Sims for a long as I can remember, in fact I found out today that the original Sims was released in 2000 and I bought it around the same time it come out. That’s nearly 20 years of playing…Wow…I suddenly feel old!

You might have heard about “nerd rage” or “gamer rage”. It usually describes when someone is playing a game (duh) and it can be any kind of game, and sometimes, and some will claim, through no fault of their own. They will inexplicably get angry. This can be for a variety of reasons.

There are two games that make me “Rage” and it’s really funny when I tell people because they are shocked. Mainly because the two games that I rage are, aren’t really that intense or really action driven…But they can just be so annoying!

The first that one drives me completely crazy is this game called “Settlers“. My partner loves it and I completely loathe it. I usually play it because I feel bad if my partners has had a bad day and I feel like I should. In fact this year my partner made a promise to me that he can only ask me 12 times a year to play it with him. I just hate it because it literally takes hours to play, the game is notorious for crashing, because it’s so old. Somehow even though we all start from the beginning, the computer players seems to be just so advanced. They start attacking, in an advanced age, right from the beginning.

The other is a well more known game “The Sims“.  I know…Odd right? Probably don’t hear about people raging too much with The Sims, but sometimes it just drives me insane. I think it might be such my computer, but it has a lot of bugs and glitches that are really annoying. Sometimes during a party, they will just suddenly freeze and not do anything, and there’s the whole thing of standing in front of the fridge so no one can cook anything. I always have to make sure that I have at least two people from the household at the parties, so one of them call people away from the fridge. So they can make the birthday cake and age up.

Are there any games that make you rage? Especially the unexpected ones!

One of most favourite games in the whole wide world is “The Sims“. It’s pretty much one of the only games that I can just play for hours. I’m not even kidding, I can literally play it for hours and not even realise the time. If you play Sims like I do, you will probably be able to relate to this article:

23 Funny Tweets Only “The Sims” Fans Will Get (Buzzfeed)

What are your favourite games?

One of my most popular Blogs has apparently been the Blog about my Sims 4, which is quiet entertaining to me. I love playing it and my characters has been “developing”. So I thought that I give little random updates about the characters I’m playing all the time.

These two characters are Arwen Oakenshield and Aragorn Bloom and they are both now teenagers, dating, in a relationships and have recently swapped promise rings. It is SO cute! I am loving playing this game, I am probably going to buy some kind of extension game. I’m to busy though at the moment to really consider that…Watch this space for more though!…

After a few hours of playing “The Sims 4” (which I am secretly addicted to…Okay, it’s no secret that I’m addicted to it)…but after hours of playing I realised two characters who just seemed fated to be together in whatever “world” they are in. I am even considering making my first “Sims” video, I’ve never made one before so we’ll see how it goes.

I would like to introduce Arwen Oakenshield and Aragorn Bloom…Do you recognise those names? 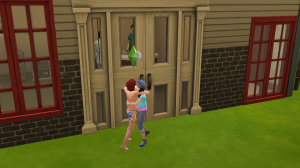