SO I got this from Sparks from A Combustible Mind…Who in turn got it from An Upturned Soul. Its not a “Share Your World”, which I normally post on the Thursdays. It’s more about looking at me from a more philosophical view. They’re in-depth type questions, more getting to know you/me. Feel free to share and do these questions yourself!

Q: What would you say was a normal status for you?

I’ve seen a few people say they don’t get this question. I think I do? Normally I am pretty laid back and happy go lucky. At the moment though, it always seems a little more “Is Trump gone yet?” “Has the America come back, that we all knew and love” “Is Obama President again”?

I try to wake up and being an open compassionate each morning to each person that I deal with each day. Doesn’t always turn out that way by the end of the day though,lol. That’s probably the normal status for myself, apart from the anxiety pills I’m on making me tired. This is the normal for me…At this moment.

Normal hasn’t felt normal for a while and I want to change that.

Q: Is there anything you’ve allowed yourself to do more of which has shifted your experience of yourself?

I’ve started allowing myself to fight back. I don’t mean getting into people’s faces, but I’m just more open with people. Instead of waiting for something to blow up, I’m much more “Look, this is how that made me feel” “This is why I’m reacting this way”. It does help though having people in my life now that are actually willingly to listen, rather than make everything about themselves. Allowing myself to be more open, has made me more expressive and it’s been great! Despite what I used to think about myself, I have a lot of common sense. I used to think I was really gullible and naive, I’m not.

Q: Has aging actually been a bonus rather than a minus for you?

It’s been a bit of both to be honest. My body falls apart a lot of more easily than it used too, but I’m much more sensible and much more saying my piece. If somethings wrong with me, I deal with it, rather than waiting and thinking it’ll work it’s self out.  I just wish that I had more of this self assurance years ago.

Q: What does a powercut mean for you, metaphorically or otherwise?

A power cut for is an emotional/mental one. Usually that means I am hiding in my bed, in my bedroom and I’m just letting all the tears come out. Usually you might find me hugging a plushie. This usually happens to me once a year. Just over time, you keep giving and giving and caring and it may be a little thing. There’ll always be a moment or a situation where I just know that I need to stop and cry. It might only be for an hour or so, or last all day.

Q: Have you ever thought/felt that you were broken (or had finally fractured after an extended period of too much stress) and that this was actually a good thing?

A couple of years ago I had developed Sciatica. If you have ever suffered from that, you will know how painful it can be. I knew something was wrong and I went to a physio and it felt alright after the massage they gave me. Woke up that night/early morning, it was AGONY! I was crying, we nearly called for an ambulance.

It ended up being a good thing because things like this, people really show who they are during your darkest times…or most painful. It was the first big deal my partner and I went through as well together. I couldn’t really walk without strong pain killers. It made me realise how much I walk, I put on weight, my health went down. I was literally using my Great Grandmothers walking cane to get around (Thanks Great Nana <3. She had lost half of one of her legs due to polio).

Which sounds terrible, but it made me stronger on the inside. I had to get tough with people because my Doctors didn’t believe I had sciatica. They wouldn’t let me go and get a scan, I made them and proved that I was right. I told the physio I shouldn’t get massaged in the area of pain until I knew what it was. Since they had all failed me, I had to get my voice. I was not going through that pain again!

Q: What’s your favorite subject (or subjective perspective) and why?

I honestly love learning about anything really. I mean I have to be in the mood with some things though. Maths and Science I either have to have it explained to me slowly, or I just don’t get it at all.

Q: What have you recently watched and do you know why you watched it? Did you learn anything from it?

I have been watching “Different Strokes” on the weekend. Sports were literally on every other single channels. I have always known this, but I feel like we should replay this series right now. It’s all completely still relevant, which in itself is kind of sad. Meaning that not much has changed since then. BLM, adoptive families, peer pressure and all that social stuff. It’s a great little series, I highly recommend everyone watches it.

Q: What do you think I mean by a ‘social must’?

I think a social must is something that you MUST do when you are out and surrounded by other people. Whether that be with people you know or don’t. I saw this guy picking his nose walking through a shopping centre…No, just no! Not picking your nose is a definite social must.

Q: Have you ever forced yourself to read a must-read book? Which one and why?

I did actually start to read “50 Shades of Grey”…and I never finished it. I only even began to read it, because for some reason, my Mum bought it. She bought all of them, some kind of deal. Neither of us have finished it…Well that’s what she tells me!

How do you feel about laying books open, face down?

This is a really great question! It’s a question in the Library field that has been asked for centuries! Literally last week we were talking about this where I worked. There are a whole bunch of variations, based on the weight, how many pages, how strong the book is.

However, I try not to leave my book open any which way if possible, but if I had to chose or something else got my attention and I have to put it down and I have no bookmarks around. I am probably most likely to turn my book open and face down. 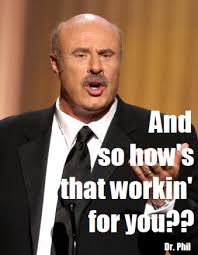 I honestly wish I could post this in Instagram comments sometimes! I’m sort of iffy with Dr Phil.

The amount of times I’ve encountered people who say horrible things because apparently if it’s been done to you, it’s okay for you to do it (see previous posts about my feelings about this here). Next time you say to someone you can’t say horrible things to others about race, sexism, sexual harassment, gender issues, because of who you are…Ask yourself when you’re spilling the same hate that was once spilt towards you …

“Hows that’s workin’ for you?

I was talking to my mum a couple of days ago and we were just talking about how which people know us really well and how much do people ‘think’ they know us. It started me thinking. I’m always pleasant to people, people always comment on how kind I am and how patient I always seem to be. I know I have a guard though and I know that I have a real hard time telling people…well…a lot really.

It’s not as though I wouldn’t open up, if someone actually ask me. If someone asked me a question about myself, I would tell them, but I just can’t willingly tell you about me.

It made me think about who are we really honesty with, who truly knows us…All of us. If I was to die tonight, who would be shocked to discover things about me, have I said all that I wanted to say?

What about yourselves? Do you think people know everything there is too know about you?

I need to write this to you, but I can never show you, I can never open my heart up to you again. In the rest of my days, you can never actually know this.

It’s weird this feeling that I have. I hate you, I don’t trust you and now you have made me feel unsafe and unwanted. Yet at the same time, I am completely, madly in love with you still. Isn’t that weird? I know that I can’t ever be with you and with the attitude that you have seemed to develop over night I don’t want to, but yet here I am. Flirting, chatting with other guys and opening my heart to them, but still in love with you?

Yet, if anyone were to tell me that I have no self respect for myself, I know that they’re in the wrong. I don’t want you back, ever again. Not in a millions years would I ever, and sometimes I think it’s because I miss who I thought you were, not who you turned out to be.

You were the first person that I could really see myself settling down with, getting married, having babies, doing the whole grown up thing. I get scared sometimes that now I am far too damaged to feel like that again, yet there is hope. I can hear her calling in the back of my mind “Don’t give up!”