Just a friendly reminder that this is the last week for Safari Lives television special on Nat Geo Wild television station. If you do not live in the United States, like my self, you can also keep watching it on the Internet as well, as per usual.

I thought that I should post the link so you can have a look at the actual Park where most of these animals reside. When I say reside, they are free to come back and forth as they please.

Just a little reminder that this is the second to last show for Wild Earth’s #safarilive show on Nat Geo Wild…Just on the television if you live in America…It should be on right now…Come and join us!

Feeling blue? Did your team lose? Looking for something to do today? Want to experience something different? Like animals…If you don’t…What’s wrong with you? =P

THEN TUNE IN RIGHT NOW TOO

Watch wild African animals in all of their natural glory, with very well educated guides … Who know what they are talking about and have some fun while doing it and at the same time you can chat with awesome people like me!

The best part of it though, for today, and if you are lucky enough to live in the United States. You can watch it on the tv on the awesome Nat Geo Wild channel. If you have a Twitter account look out for the hashtag #safarilive too!

Just a reminder from today, for the month of January, if you live in the United States you can watch the Safari Live Drive, (the live-stream I am obsessed with) on the Nat Geo Wild channel. If you can’t watch it on the television you will still be able to watch it via Ustream (find here: SafariLiveUstream and the YouTube channel (find here: SafariLiveYouTube)

I will see you there!

For those who are regular readers of my Blog, you will know that I am obsessed with a particular Ustream tv program called “Wildearth Safari” or if you follow Twitter “#SafariLive”. I’ve been watching it for a couple of years or so now. You might have even watched it during Big Cat Week over the last couple of years, as during that week they put the drive live on television.

The last few months have been hard for the animals there, mainly the grass eater/prey type food. There has been a really bad drought and the last month in particular, you can tell how rough it has been getting. A lot of the predators have not even been hunting to much as the prey has been succumbing to the drought.

Coming from a country that also suffers a lot from droughts, I think it’s the only time I love hearing that rain is coming. I have been watching the live feeds with the sound turned up as the rain falls. The animals so desperately need it. It’s been so sad to see them getting worse and worse. Although on the other side the predators have been having an amazing time!

On a completely but kind of related topic…Just to let my American comrades know that this week is “Big Cat Week” on Nat Geo Wild and the drives will be showing. You should take complete advantage of this. I wish we had it here down under.

I hope that you all had a great New Year and however you celebrated it I hope that it was fun, it was exactly what you wanted, it was safe and that you don’t have too much of a sore head.

Bringing in the New Year I thought that I would share with you a few photos of the new life at Wild Earth Safari – Ustream (which we all know how obsessed I am with that live stream!) 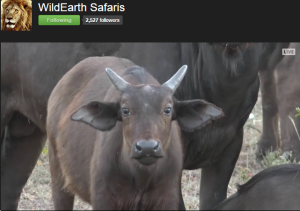 Everyone who follows my Blog knows about my obsession with Wild Earth’s Safari Live, which is presented by both Ustream and Nat Geo. Originally the Live Safari (tweet: #SafariLive) was supposed to end of February, but then they made an announcement that they were going to extend it by three months.

Now for the exciting news! They’ve decided to introduce all new guides, so they don’t actually know when they are going to end the drives! Forever Safari’s.

So to “celebrate” I’ve put a little collage together of some of the animals that we get to see and you should all see too! 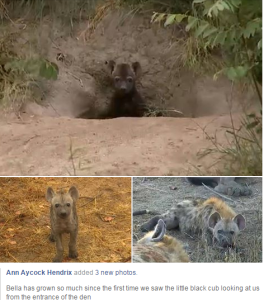 This is Bella, we have been watching her grow up. She is such a little cutie. Hyena’s are a matriarchal society and unfortunately she has two younger cubs that she hangs out with that are her “superiors”, but she has such character! We know that the other two cubs one is a girl and one is a boy, because if Hyena have two cubs of the same gender, one has to be killed =/

(The other two…They don’t have a name yet). 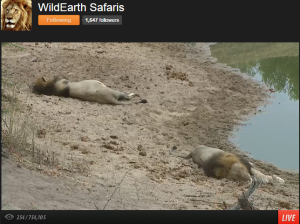 So because of the weather changes the Wild Earth Safari drive live web-feed has know changed times…again! The easiest way to explain it is the Sunrise drives are now 30 minutes (half an hour) later and the evening/sunset drive is now an hour early.

These changes will ensure that the drives start early enough, with sunrise being later in our winter months, and the earlier sunsets.

Viewers will now see the sunrise drive a half hour later and the sunset drive an hour earlier than previously scheduled. This means that if you live in the Pacific Time Zone, the AM safari begins at 9:30pm on Wednesday, April 8, in the Central Time Zone at 11:30pm and in the Atlantic Time Zone at 00:30am on Thursday, April 9″.