If you were given a boat or yacht today, what would you name it?  (You can always sell the yacht later):

I think that honestly the only way I would even have an Yacht/Boat is if I won it, I get really bad sea sick motion. I would definitely be selling it, but if I was able to name it. I might name it something like “The Lady” or the “Duchess Lady”. ‘Something Fancy’.

Which of Snow White’s 7 dwarfs describes you best?  (Doc, Happy, Bashful, Sleepy, Sneezy, Grumpy, Dopey) Plus what would the 8th dwarf’s name be?

I think that I would have to be somewhere between Happy and Dopey. Sometimes me being happy can make me Dopey at times. Sometimes when I’m meet someone for the first time I’m Bashful, but as I’ve gotten older, this happens less and less. As for the name of the 8th Dwarf, I think it would have to be something like: Smartie…I don’t know!

Name a song or two which are included on the soundtrack to your life?

The two that I would have to choose between is:

Homicide Hunter…Don’t ask me why, but I just love that show. Lt Kenda has had such an interesting career, he’s solved over 400 cases. They even brought him in on the Jon Benet case, ages after though. Read more about it here: LT. JOE KENDA EXPLAINS HOW JUSTICE CAN STILL BE SERVED FOR THREE INFAMOUS, UNSOLVED CASES July 16, 2015 by Crime Feed Staff

I found out Moulin Rouge (IMDb) was on the television tonight. Now this is one of my favourite movies of all time! I wanted to watch it, but my partner wont let me…We have to watch Harry Potter instead. As much as I may like Harry Potter and I know that I have Moulin Rouge on DVD and it’s on Australian netflix. They play the Harry Potter series all the time, they usually finish off the series and then start the series on another channel.

This weekend is the party for my Birthday and to celebrate I am having a themed party called “Fantasy Rouge”. Where people dress up as a favourite character but put a “Moulin Rouge” twist on it. I thought therefore this quote is appropriate for this week. 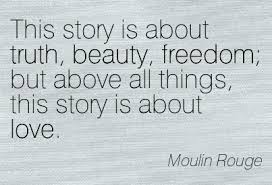 My 30th is coming up soon and to celebrate it I will be having a Fantasy Rouge party. Pretty much people will be coming as a favourite cartoon character but putting a ‘moulin rouge’ twist on it. I have decided to put a twist on one of my favourite female characters…Harley Quinn.

Harley Quinn is a fictional character and a villain in the DC Universe and is most well known as the psychotic love interest of the “Joker”.

Harley’s first ever appearance was in the “Batman: The Animated Series” on September 11, 1992, the episode ‘Joker’s Favor’. Originally Joker was supposed to jump out of a cake as a distraction to capture and take a group of Gotham police officers hostage. However the writers and creators thought that this may seem too bizarre, even for the Joker. So sidekick “Harley Quinn” was made, although the Joker ended up jumping out of the cake himself. Harley was originally created just as a walk-on part, but soon become a popular character in her own right.

Harley Quinn became fascinated with the Joker while working as his psychiatrist after becoming intrigued by his crazy motives. Joker, knowing of Harley’s past having a mother who constantly calls her young daughter “evil, a con-man for a father and a dead beat brother. The Joker uses this information on Harley to gain her sympathy. This eventually works and dressing up as Harley Quinn, she helps the Joker escape Arkham Asylum. 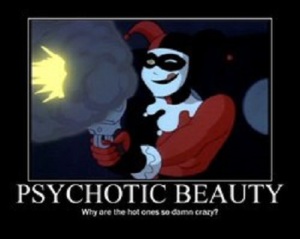 During my studies one of our projects was to create a Wikispace…Please check the link to view my creation on Harley Quinn: