Welcome to my second “episode” of Magical Monday, where I am going to write nothing but something positive. Mondays have a very bad reputation and I get it, I mean most people’s working week starts on the Monday. From there it seems like a very long road. So lets try to make it fun.

For this Magic Monday, I wanted to talk about probably my most favourite musician in the whole wide world. Even if they are no longer apart of this world anymore. I almost have a whimsical love for this artist. Different time, different place, it totally would have happened,lol. He was kind of a whimsical person. I think it’s also one of the reasons that I liked my ex, a couple of years after we had broken up and I saw a photo of him. It freaked me out a lot, because my ex looked exactly like this artist. I do miss this artists beautiful spirit in the world.

Shall I stop speaking now?

I know that John probably talked the most about Peace, and I don’t think there isn’t a single soul that doesn’t love “Imagine” But too myself, George was the one who practised it the best. He wasn’t like John in that, George was a lot more gentle than John was. George was my kind of “peaceful” person. I just really think he was a sweet soul. Very dreamy, very laid back. Although apparently very serious when need be. He was just a dream.

Below is posted my favourite song of his, I don’t care it was “The Beatles” He wrote it. I always play it on the first day that I really feel like Spring is back. But also when I need cheering up, almost like a metaphorical sun.

Uploaded by: The Beatles

Probably not the first words that you want to see on a Monday morning…or maybe you do, I’m not here to judge you and your freakish ways (I am totally not being serious by the way ~.^).

However, I came across this article over the weekend and I thought that I would share it with you.

According to the article going out to do a “full-on” exercise routine when you are particularly angry may actually increase your chances of getting a heart attack. I guess because working out when you are angry increases, pretty much everything. Your heart rate increases, your breathing does…EVERYTHING!

Which I found interesting, because I don’t know about everyone else, that’s the time I go out and have a long quick walks. I used to do them all the time in a past relationship! I used to just take off and go for a long walk.

Being angry or upset doubled the risk of suffering heart attack symptoms within an hour; heavy physical exertion did the same. Having both at the same time more than tripled the risk for a heart attack. The risk was greatest between 6 p.m. and midnight, and was independent of other factors such as smoking, high blood pressure or obesity.

I guess my question to you is what would you do instead? Do you, my lovely readers, have other ways to calm yourself down? Personally, I like listening to music, to soothe me.

Well I had an interesting weekend and I’m kind of glad it’s over…It had really great moments and really horrible moments. It’s over and done with now though and I can finally have my first cup of coffee in my new Harley Quinn coffee cup!

I am a bit tired this morning and so glad that I have the day off today. I’m back in my home state though =D

I’ve had such an interesting weekend, in that I did a bit of everything this week…Had a bit of a party, did a bit of retail therapy and had lunch with the family which then turned into dinner as we helped my cousin start moving into her new house.

So now my brain is completely blocked with something to actually write this morning. I have so many big things that could possibly be around the corner and I don’t know if they’re going to happen or not…Don’t you just hate that feeling!lol

As you can probably all imagine I am little tired this Monday morning, luckily I have no work, but you always wake up at the same time anyways. I am so tired though I cannot think at all what to write for today.

So I thought that I would ask how your weekend went, how did your weekend shape up to be? Here a few things that happened over the weekend from all over the globe: 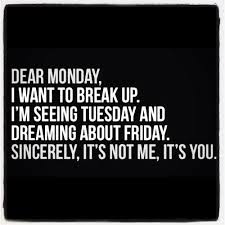 So I have a lot going in this next week and I’ve written a Blog for later in the week about some changes that are going for me personally. The quote above is definitely how I am feeling about this week and I just really want it to be over with and now where I stand with everything. I am making myself very busy this week and keeping myself preoccupied.

So today is going to be very interesting, my leg is feeling better BUT I have to do a lot of walking around today and I’m wondering how my leg is going to handle it today. Coffee Go!