Now that things are starting to settle, and we can see things a little more clearer, I am posting this. Please excuse my bad Photoshop abilities.

For those who don’t know, Dan Andrews is a Labor/Democrat type state leader. He has been an amazing leader throughout Victoria’s COVID. They are currently about to go through another election. I can’t help but note, but despite the media being mainly right winged owned. At least the right wing leading, more and more people are voting for left wing politics.

Its one of the positives of social media, people cannot hide as they once did. Even though they complain about having no “Free Speech”, we can see their speech, we can see very freely what they’re saying. We can see when they lie, we can see their hypocrisy. The funny thing is so though, they think we can’t see it.

I was asked a really odd question the other day “Don’t I think that Meghan Markle is narcissistic ?” I think I gave her a ‘look’, because she quickly said “Well I do”.

I have noticed that this attitude seems to be people of a certain generation. The same generation that gave the Royal Family a hard time over Princess Diana. I remember the hatred from older generations with how Diana was treated. Now they all want to hate on Meghan and Harry? Pick a side, lol

I have lost a lot of respect over people over the whole Harry and Meghan situation. Unless you are part of the royal family, you do NOT know how it works. We just recently had a used to be a reputable tv show. Do THREE shows in one week just on Meghan Markle, and they actually had the audacity to ask “Is she the bully, or is she being bullied?” Excuse me? You have a LITERAL PEDOPHILE in the Royal family, and you’re doing THREE shows in ONE week on Meghan Markle and you REALLY have to ask that?

You don’t know them to be making comments like that, about people YOU DONT KNOW. You also are IGNORING the literal pedophile in the Royal Family. I want to know about HIM, I want to know about why everyone is so silent about that, and why you’re asking me inane questions about people WE DON’T KNOW. I don’t care about Harry and Meghan, I want to know more about WHY PRINCE PEDOPHILE ANDREW is just being let off, scott-free, by these same stupid people. Who are asking me these really stupid questions.

Like Prince Harry said, you remember him? Princess Diana’s actual child, not you. He can see the same thing happening that happened with his MOTHER, happening with HIS WIFE. If these people stopped reading trash tabloids for two seconds and get with reality, they’d see it too.

And you know something? I think Harry is actually the Queens favourite. 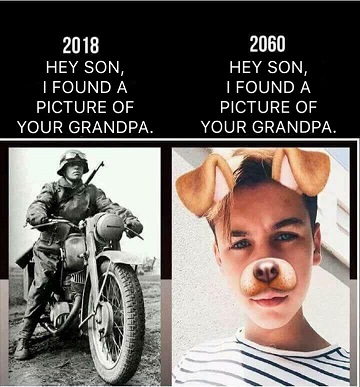 I found this on the Facebook page HeavyGrinder … I have also since unliked the page, because this “post” is so stupid and so wrong.

I hate pictures like these…Just be grateful that we are not in a War…I wouldn’t want a Nazi defending me anyways! It’s pretty disrespectful as well, since that is what they fought for, for us to be safe. So that there are no more Wars

Also…the guy on the left is actually a Nazi solider…

There is SO much wrong with this comparison,lol…People can’t have fun anymore? I know plenty of young people in the Army who use snap-chat…It’s a good way to have some fun…We don’t know this boy, and you know what they say about assumptions!

The solider is a German solider…So they want their children to be a Nazi?…We are VERY lucky in Australia…The kids in american are facing a battle right now. They don’t know when the next mass shooting will take place, but they still have to go…I’d call that extremely brave! Let alone all the cyber bullying that has just exploded these days.

I’ve been trying to find this hashtag that I heard about last week, because there was tweet that sort of spoke to me and how different the generations are. Mainly because I completely disagreed with the tweet but also we’re not so different from the previous generation, we just have different “tools”.

#BeforeTheInternetExisted … One of the tweets got me because they said that

Now this got to me because although most people now travelling with their phones or tablets. It is really different though? I can remember people reading books and their newspaper, or doing crosswords. I also don’t remember buses and trains/trams talking to complete strangers happily and bubbly, like it was the thing to do? I don’t know about anyone else, but I was taught to avoid strangers, especially when I was by myself.

So is having a piece of technology on a bus/train/tram really that different from having a book or a newspaper? Is it really more psychopathic?

There are different things between the generations, no doubt? But there are some that are just not that different to me.

So I had an interesting talk about “respect” with a close male family member of mine tonight. Well I say “talk” it was more him texting me saying how I don’t respect him because I didn’t drop all my plans, even though we went out of our way to make other plans, it just wasn’t possible, because he’s family and I was told to “grow up” and he’ll talk to me then.

Respect is an interesting thing, it makes me curious that people who NEVER treat you with respect, expect it in return. It’s an interesting thing when a person will try to passively aggressively publicly ostracise you, but then turn into a whimpering mess when you hit back at them. It is interesting with how many people will say “Oh well, that’s just them” So it’s alright for them to do that, but it’s NOT alright for me to stand up to them, because that’s who I am.

I think in this world of today, you really have to know who you are. People these days seem to change with what ever works easier and no one wants any “drama”. Then I go and watch a show like “Band of Brothers” and think to myself “How would these guys feel about the generation of today” Would they think “This is what we died and suffered for? So someone could post a picture that isn’t even there own picture, and not even there own words to prove how there better than somebody else”…It’s pretty pathetic really.

All the interviews with the soldiers from the amazing tv series Band Of Brothers. I’ve never had any direct experience of war and i found these interviews really compelling and deeply moving.