This is written on the … fly … sly??? Either way it’s been quickly written up.

Yesterday, I was about to, kind of, start an argument with a TERF. I don’t know what it is about them, they cry “WOMENS RIGHTS”, but they have no problem with harassing women who support trans people. Like my mum and I discussed, up until 3 years ago no one really had a problem with trans people. Sure, there’s always that one or two people.

Anyway, scrap that. I went to ask a TERF a question, then about halfway through the day I deleted the comment.

Something better had happened!

Despite the constant attacks from the rags, such as Daily Mail, the Times, the Tory Government. During the day, I saw that…On the heels of Bailey and Rowling LOSING their hate campaign against Stonewall.

It’s a small move since LGB Alliance “headquarters” are in the UK. But a move either way, especially in Ireland! All these other countries who have been fraught with years of civil disputes and terrible leadership, are now over taking the UK. In terms of progression.

One of LGB “Alliances” co-founder is the above Allison Bailey, who tried to sue Stonewall and lost.

So, today I decided I wasn’t going to “fight” anyone transphobic and just enjoy the little things in life ❤

I would like to just say that I love these little Beetles, they are so determined with something so gross,lol

I feel like this has been the first year where I really stopped caring so much. Every now and then I’ll have to take time off of social media, because my anxiety plays up. But I feel like I actually have spent a year truly respecting myself. Sometimes respecting yourself does mean to take time to yourself.

It’s interesting because it was thanks to my three ex “best friends” and what happened at the beginning of the year. I was in shock for a while, maybe a week and then after that I just got annoyed and I’ve been annoyed for a while now, but I still didn’t miss them. I don’t even think for an hour. Too myself, if I can let go of them, and be alright…Because it was right…Then I can do it with anyone! Especially if it’s right and that’s when everything go easier for me.

That is something I want to focus on more next year. Walking away instead of hanging around and hanging on for sentimental reasons. If it’s not right, then it’s not right. 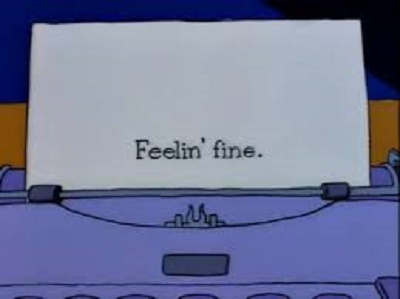 I didn’t really find anything to write about. A fact or something funny that would be laughable or interesting to you all this Friday. It’s been an interesting week for myself. I’ve had ups and down, shocks and good shocks. It’s all been good! We’re supposed to be in Spring right, but it feels like Winter.

It’s just been…a week…You know what I mean? Nothing to exciting, not too dramatic, just fine. I think sometimes we forget that “fine” is absolutely “fine”. No dramas mean no exactly that, no dramas…and isn’t that just fine with all of us? I’ve been choosing to be less on Twitter and more on Facebook, if that’s even possible! I found that I was starting to feel about Twitter the way I sometimes still feel about Facebook.

Yet at the same time, it’s been a good week as well. After not having any work for a couple of weeks, I’m getting a lot, which is great for Christmas time! I’ve also just been talking a lot to people and just getting things out there, making sure people don’t worry. I pick up my worry wart behaviour from a lot of other people.

Most importantly, I’ve just been having fun.

I think that every now and then we all need that week where it’s just not that exciting of a week. No drama, just the same old same old. I have just randomly grinned so much this week. Just feeling lucky and happy.

What a horrible week!

Apart from a lovely a visit from my baby brother, everything else has gone horribly wrong!

I do have to say that I have been loving the responses to my Liebsters Award post and how its not just myself that has some good plush love happening! In a totally G rated capacity…(that could have been weird!lol)

Below is a picture of myself and my latest purchase…Her name is Savannah and she is a “Charlie Bear“, but I had to go on ebay to find her. They’ve all discontinued her year. I bought her because she looked just the right size for some cuddling and I also bought her in memory and in honour of all the little lion cubs that I’ve seen and we’ve lost on safarilive 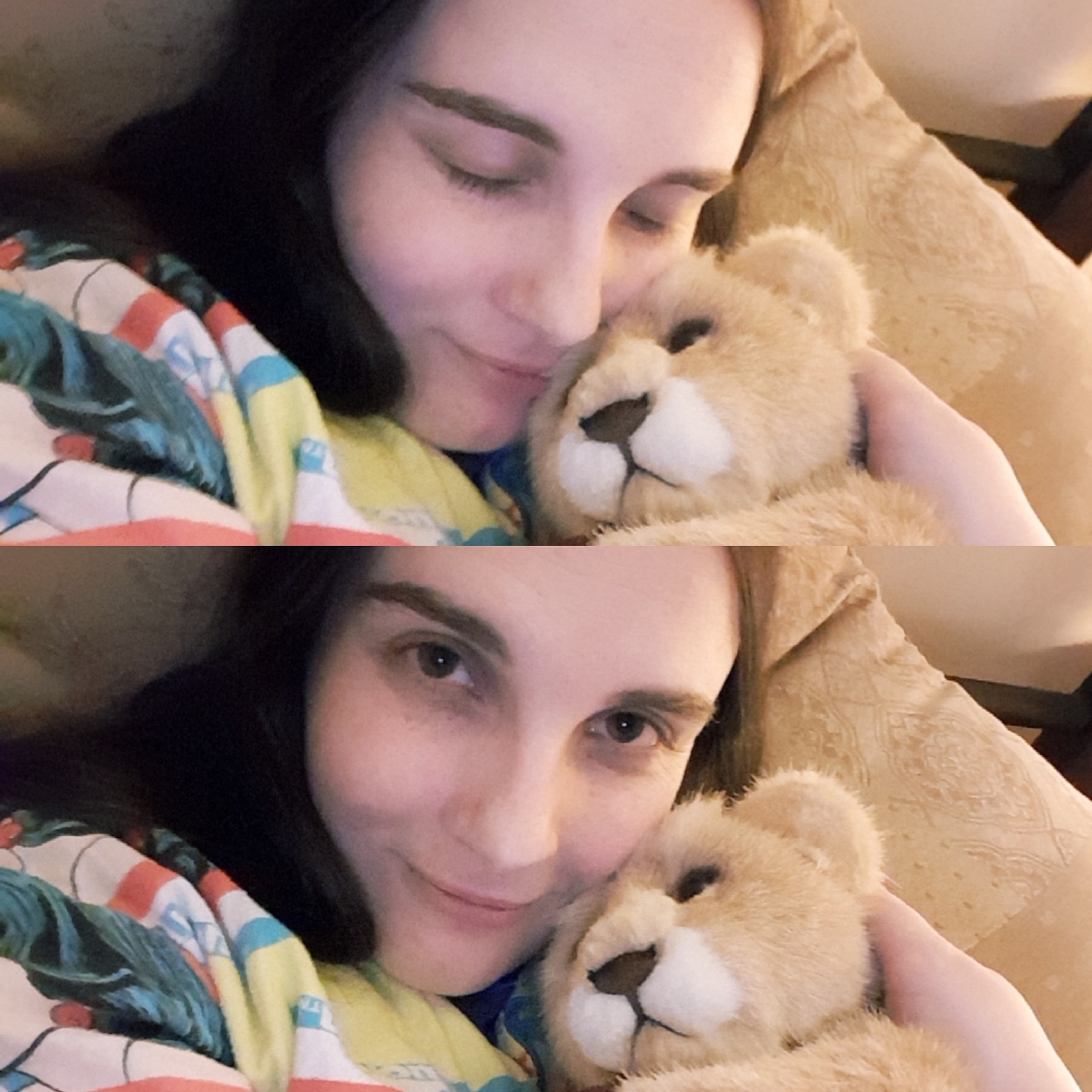 That is the question…

I was just randomly thinking about this…and my current situation with some people.

My Mum has always said that the opposite to love is not hate, it’s indifference..and I agree with her.

I was talking about my situation with a few people and they said “I’ll bet it takes you a while to forgive them” and the thing is…I already had…the next day….I thought to myself I think a lot of it had to do with simple the fact, I just had stop caring.

However, that was just even more proof too me…It was always about them…Hindsight and all that…I have been more upset about losing jerks of ex’s.

But had I forgiven them so quickly, because I just did not care anymore?

So if you just don’t plain care anymore, is that the same as forgiveness? Or is it just easier to forgive because you don’t care either way.

I realised the other day you can’t miss someone if they never brought anything to your life. I keep waiting for the moment where I feel sad and cry but it doesn’t seem to be happening…That’s fine.

When you realise someone never really brought anything to your life, it’s then that you start to let them go.

It’s okay not to be sad, it’s okay to realise someone you cared about was not a very nice person. It’s alright to not miss them at all. It doesn’t mean there’s something wrong with you, it doesn’t mean you are emotionless or heartless. They were just, as my Gran would say, “not part of your tribe”.

I’m just going to add another link here, that is not in the video below:

This will also be the last time I mention my ex-friends. I think I’ve been in shock. I will let you know as well, this Vlog goes on for a while. Be Prepared!

I had an interesting conversation with a friend over the weekend and it made me think how people will view grudges differently, depending on which side you are on That’s not too say that everyone is like this, after all we all experience things in different ways.

Very recently both my friend and I both had people from our past that sent us friends on request on Facebook. Both people had been very cruel to both of us, for no good reasons. They both sent us a friends request with no message, apology or reasons why they felt like we should be “Facebook friends” and we both said no. One of us then heard about how their ex-friend was telling everybody how my friend was holding onto a grudge, and I was told “it’s in the past, why can’t I just let it go”.

I also have been in a situation where someone who used to bully me in primary school, wrote a message to me on Facebook and apologised. I accepted their friends request and I do not have one single regret.

I am a big believer in letting things go and forgiving people…not for them, but for yourself. Both of us can honestly say that we hold no grudge or even ill-will towards these people. We just don’t think we have to be friends with everybody. Clearly, the fact also that these people can’t even understand and instead of sending us a message to ask us “Why”, they decided to talk about it with everybody else, except for us. Which to both of us, shows us that really nothing has changed.

So, how about yourself, do you hold onto grudges?Are you good at letting things go? Do you believe some people will just never change? Have you ever been in a similar situation and what did you do?

Has a book ever made you cry?

I am going to have to go with a resounding “YES”, in fact it was the classic book I was writing about last week (This or That #70) Ruth Park’s “Playing Beatie Bow” that was probably one of the first books that ever made me cry.

I’m not honestly sure how much I can write about why it made me cry, without giving big plot details. I guess the best I can say is that there is a lot of learning in the book. A lot of learning to appreciate the past and the present, a lot of appreciation for who you have in your life.

Over the weekend I watched one of my favourite musicals “The Phantom of the Opera” and there is one song…No matter, if I’ve been drinking or not, it makes me cry every time…Because it reminds me of a very special person. A person who loved musicals and the theatre. It actually reminds me of two people that I’ve lost that I was very close too, but mostly one of them.

Uploaded by: The Phantom of the Opera

Over the weekend I obtained a “little” treasure, I call it little because as much as the figurine is little, I actually thought that it was going to a lot smaller!lol…I also swear I am way more happier than my faces appears in the picture, I was trying to take it quickly before I left. 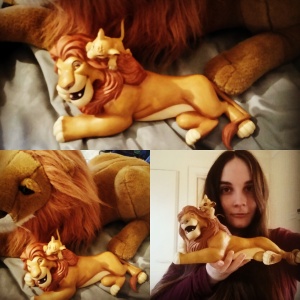 I have loved the Lion King ever since I was little and I have been stalking this particular figurine for about a year and I finally found one that was really cheap, compared the others. Mainly because this one does not come with the box (but still the certificate of authentication). Mufasa has to be one of my favourite all time Disney characters.

I have probably about 4-5 figurines that I could never get rid of and they include: Harley Quinn, Belle from Beauty and the Beast. What about you fellow readers, do you have any special little treasures?