I tell you something, Twitter has some really dumb people on it. The other day a “TERF” wrote and I quote “I refuse to be called a bleeding body…I am woman!”

First thing I thought of was “If you prick us do we not bleed? If you tickle us do we not laugh? If you poison us do we not die? And if you wrong us shall we not revenge?”

Then I thought, well technically, we’re ALL a bleeding body. At some point, I am like 99.99% percent sure that we’ve bled.

In the end I said to them “Call yourself whatever you want”.

Which brings me to the point of my post. If you could bleed whatever you wanted too…What would you bleed?

Stop misrepresenting us as “weak little things” It’s demeaning and not right.

If you’re a pregnant person, why are you risking yourself becoming arrested? Stop USING your baby as a way to get out of crime. It’s disgusting’s it’s beneath us. If you want to fight for something, or commit a crime. Know that you have the potential to be arrested! This isn’t THAT difficult.

A couple of years ago, we had two “mothers” get off with nearly killing two ambulance workers. Because, they’re “mothers”.

It was disgusting, and there was such a public outcry. One of them had to retire, and the other ambulance driver has PTSD.

It’s pathetic ladies, it truly is.

We also had an anti-vaxxer, arrested for organizing an dis-information parade. All of them outrage “She’s pregnant” SO WHAT! She knew perfectly well what might happen. Didn’t stop her. She doesn’t care about her baby, or others lives. I do, so so what. There were a LOT of children used here by their parents to not be “arrested” at the dis-information parades. It was pretty gross.

Don’t do the crime, if you don’t want to do the time. We’re in 2022 ladies, you want equal rights? That includes being charged with a crime, if you commit one. Pregnant or mother

I don’t see a lot of these people saying new Fathers should be let out of jail. Why is that?

I choose, when/if I become pregnant, I will not be participating in any protests. Even if I choose to be peaceful at a protest, there’s no guarantee that one, the police, in all their power, arrest me, because I would be an easy target. Two, it wouldn’t turn violent. You can’t guarantee that, that although YOU maybe peaceful, that it would stay that way.

Now I am not saying that you HAVE to love the right wing Christian Conservatives. Be as rude as you like to them, after all, if they don’t care for others lives, why would you be polite to them? But make sure you are doing it from a good place. Like every time I’m rude to a transphobe, it’s actually not that rude. Except for a fuck here or there. It’s just the truth. Now SOME people think that it’s being rude calling a bigot, a bigot. Or a snob, a snob.

And quiet honestly, every time I tell a transphobic “person” or any bigot exactly how I feel about them. I am happy, and I can be happy in the knowledge that not all women are blind sheep, just ready to like “anything”. That some women out there still have strength, and the back bone to kick ASS! And to bring down the actual patriarchy, not being another female patriarchy protector. Like all the wonderful feminists out there, right now! I get mad at the bigots, because their actions and words are having REAL LIFE CONSEQUENCES. But I always feel better telling exactly how I feel about them and not running away from them, calling them out.

You can’t have Equality with just U…Hahahahaha. It’s a a Equaliweeee…Not equalimeee …. I could come up with so many of these, lol

Having noticed that TERFs have been calling themselves “Feminist” a lot lately. I will tell you what it is not.

Firstly TERFism is not Feminism, haha

Whether you agree or call yourself one or not. Doesn’t mean it doesn’t automatically mean you are a feminist.

I consider myself a Feminist, because I believe in Equality. Now there is another term that people like to use “Equalitarian”. Which is basically, equality for both sexes.

I personally, have no problem with either of these terms. They mean pretty much the same thing. Feminism just has a focus on Females/Women.

Feminism itself though, is not a weapon to use against others to “get back” at those who have abused the patriarchy.

Feminism is not a excuse to hide behind and attack others.

Feminism is not a excuse to hide behind women and girls, and attack others.

Feminism is for equality.

You can’t have feminism without men either. Men can absolutely be Feminists too. If we choose to exclude men from feminism, how would that make it better than the patriarchy?

Keep up the good fighting!

Let this be the last Vote for Yes when it comes the Marriage Equality!

I’m not sure how much you’ve heard, but here “Down Under” we have a very important postal vote coming out to try and get same-sex marriage equality…Even though most other countries just seem to “get it”.

Unfortunately what also goes with that is the “Trolls”…Sooooooooo many Trolls…You can’t imagine the Trolls…This is probably the best advice, you HAVE to ignore them! Some of them can get really nasty, but you can delete, block and get moving…

The BEST thing you can do is to get out there…vote…Advocate all the Yes’s that you can! 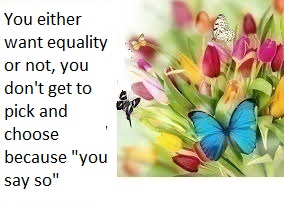 *These opinions and views are entirely my own*

I feel like I have to get this off my chest, because it really bugs me…Men getting raped isn’t “okay” or “alright” because when a women gets raped we get called liars and all sorts…Guess what, when a man gets raped the EXACT same things happen. They get made fun of, they get told “Why didn’t you just fight her off” It is NEVER “better” for the opposite gender to be hurt the exact same way. It’s not okay to rape ANYONE and it is not “better” for men to get raped over women…That is NOT a feminist way of life…or way of thought…You are NOT a feminist if that’s what you think.

There…I got it off my chest

I am tired of women calling themselves “feminist” and then with things like this, somehow it’s alright for men to suffer…By the way I have noticed that it also usually other women who will hate on another women more who say “Rape”. If you look up the famous cases, such as Bill Cosby, the majority of “commentators” are other women, and not in a positive light, like “We’re here with you”. Don’t even get me started with the Chris Browns supporters are mainly all women too. Even though the guy repeatedly has injunctions and restraining orders against him, it is amazing how many women praise him…What for, I’m not even sure what for. A lot of his songs have auto-tune.

Here I am again, feeling frustrated because no matter how many times I have rejected a guy. Apparently it is MY responsibility to make them feel better again and for months to listen to how much they like me and how strong they’re feelings are for me. Even though I have made it clear that 1) I am NOT interested and 2) I have met someone.

If I did this, I would be call ‘crazy’, ‘pathetic’ and ‘stalkerish’. Yet, if I call them that and I don’t just sit there, take it and listen to something that I think is actually unhealthy and not helpful at all, I’m a bitch. Why? Why do we just have to put up with these guys harassing us? The emotional blackmail as well! I got so fed up with one guy today I literally broke and started to lose it. When I told this guy I was refusing to talk about any-more his feelings for me (I said no to him mid-December and he knows I’m dating someone else) because it was clearly not healthy and it was clearly not helpful for him. He tried to turn it back on me “Oh, I was just asking how you were doing”. I LOST it! I have not lost it like that in a really long time.

I literally FEAR rejecting guys now, I really do fear it. I have been humiliated on Facebook because of rejecting someone, which honestly made me even MORE glad that I chose to say no to that guy. Why anyone of them (a group of people decided to tag me in a picture that basically called me a “bitch” and posted it on their Facebook, they wouldn’t have dared to post it on my own wall) would think that that would make me want to date him more is beyond me. I have had guys go off on me while in their cars, that is scary as!

Guy listen to me…Man up! Not one single girl I know finds it sexy to constantly harass us after we have rejected you, in fact, it makes us want to stay away from you even more you and humiliating us does NOT work for us! Not one single girl I know has changed her mind after you posted on her wall any type of “friendzone” meme. It makes us even more glad that we don’t choose you, except we can’t say that because we’ll be called a bitch and then have our name dragged through the mud.