I have decided this week that I am going to try and do nothing but think positively. It will probably be a little tough, but I am so tired of worrying and I don’t think all this worrying is helping my anxiety…So I am determined to spend at least 80% of this week, not getting upset! Thinking only good thoughts!

All characters, soundtrack and video are by rightly owned property and copyright of 1988 Walt Disney Studio Productions.

Sung by the incredible Billy Joel.

This is one of my new year resolutions:

So I apologise for not posting a Magic Monday post…I was dealing with the Twitter-sphere and Facebook and the massive deal with the hash-tag #YesAllWomen (I strongly suggest that you look into what’s happened there and the moving speech by one of the victims fathers). Too make up for it I am posting two blog posts of weekly random literature quotes this week! 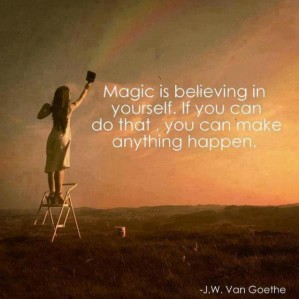 Well since I am seeing “The Hobbit: Desolation of Smaug” for the second time in Gold Class (cannot wait!) I thought it might be appropriate to talk about one of my favourite characters. I have read both the book and the, as mentioned before, this will be my second time seeing the second film…No Spoilers!lol

Thorin Oakenshield is a fictional character from J.R.R Tolkiens book “The Hobbit”. It was first released in 1937 and is the ‘prequel’ to the “Lord of the Rings” books. Thorin is one of the leading characters in “The Hobbit” and is the leader of a company of Dwarves who are planning to take back their home, the Lonely Mountain, from the Dragon Smaug. Thorins name “Oakenshield” was given to him after fighting against orcs in the Battle of Azanulbizar, with a length of oak shielding him.

Thorin is probably what you call a “Tragic Hero”. He loses a lot of immediate family and he is determined in all of his causes and is a strong and true fighter. Though no matter what successes he has, they always seem to come undone and these situations make Thorin withdrawn and seemingly cut off with only one thing on his mind. Reclaim his home and throne!

On a personal note, I always very surprised that I developed a ‘crush’ on Thorin. I normally go for the goofy character and Thorin just seems so grumpy. I think though Thorin came into my life when I was cut off from the world and was also resisting letting anyone in. Yet at the same time I became almost over protective of those who had been hurt. There was one YouTube video that I discovered when I was in a bad way that I instantly related to in terms of Thorin representing how I was feeling and the video was pretty much showing what was going on in my mind at the time. With Thorins determination and will to fight the Pale Orc, the pale orc is about 3-4 times bigger than Thorin…kind of like my ex,lol…I am also extremely stubborn,lol.