YAY!!! Monday’s are rapidly becoming one of my favourite days of the week and I have to say that it is because of this Monday Magic Blog. It has been great looking through all my books, comics, television shows, music and movies and looking at characters that have made influence over my life. Even finding new characters, my Blog for Australia Day, meant that I spent a lot of that day reading Indigenous stories.

So this week I am talking about one of my favourite “Girls” because I don’t think that I have made even Monday about a girl yet!…Rogue!

I have loved Rogue as far back as I can even remember. I don’t even actually remember when I first saw her. When I met my first boyfriend he use to play Marvel vs Capcom and he was suitably impressed that I knew who she was. I have also recently acquired the 80’s tv series on DVD and have loved re-watching it all. I have always related to Rogue in terms of her being afraid of letting anyone near her or to touch her and I don’t just mean physically. I also relate to the fierce nature she has of protecting people that she cares about.

Origin: Rogue was first featured as a Villain in Avengers Annual #10 in November 1981. She was adopted by Mystique and for many years was brought up in the Brotherhood of Evil Mutants. During a fight with Ms Marvel, Rogue accidentally absorbed Ms Marvel’s and Kree’s powers and this made her turn to the X-Men for help as she feared for her sanity. Rogue’s real name is also Anna Marie.

Powers/Ability: The ability to absorb and depending on how long she touches you for, she can take your abilities for a short while or permanently. Rogue, at one time, did lose her abilities after an encounter with Vargas. Over the years Rogue has learnt to control her powers.

Love Interest: Two of the most popular comic characters Rogue and Gambit are well-known as a power couple (and one of my favourites) in the X-Men comics. Their relationship is a very interesting one, especially with Rogue’s inability to physically able to touch or be touched, which proves to be a very large problem in their relationship. Over a long time though (and many other relationship problems) Rogue is able to control her powers to make that less of a problem. 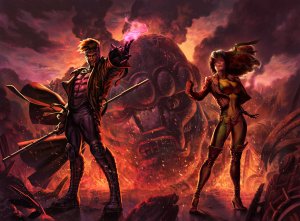