I don’t even know if I told you all, but I recently went back onto Facebook.

One of the first things I did was to apoligise to people who I’ve been unpleasant too in the past. EXCEPT for those who have actually deserved it. Mainly too people who I’ve reacted out of pain.

For all of them, I said they didn’t have to respond. I was doing this for myself, and to just plainly apoligise to them. Even though you say something like that, and you mean, it is nice to to know that they at least got the message,

All but one has let me know in someway that they did get it.

All but one, and that one was the one who just disappeared on me. They hurt me the most too, by doing that. I felt like I had to force them to talk to me, to actually break up with me. Like all my ex’s, he went and back stabbed me too. But still some of things that I said after were pretty nasty. I don’t think he ever apologized for being a bastard.

So not hearing from him and only him. Was like an instant heal. You know that saying “No answer is a answer”.

It showed me who he IS, and always has been.

Also, as a note. He’s the one who gave me my leg troubles/pains, because he was bad at “it”. A literal reminder of how much of a pain in the butt he is!

I think you should all head over to the Kindness Blog, they are a great Blog! They recently made a post (the oirignal source was from Reddit):

“Source: What issue IS black and white to you? (25 Answers to That Question)”

Reddit – What issue is Black and White to you?

My readers, what issue is Black and White to you?

My Black and Issue is this and you will see at the bottom of this page one of those reasons why:

So it’s a long weekend here in the Down Under country and I have got a few things happenings this week, seeing people that I haven’t seen in quite a while. (Which had nothing to do with my previous relationship, I just haven’t seen these people all year).

However yesterday was the last time I have ever expected to “talk” (I use that term very loosely, very hard to have a conversation with someone who wont talk back) or see my ex ever again. There was one question that I needed an answer too and he did give it. I think though he’s answer didn’t really explain why he had started to treat me so badly AFTER we broke up. I have never before had to beg anyone to talk too me and I have never had to stop being friends with an ex so soon after we broke up. I have honestly been appalled and disgusted by my ex’s actions, but when people ask me why do I think he’s done it…All I can say is…I honestly don’t know.

What I can say though with 100% certainty is that it is on him and it is absolutely not a reflection on me or the type of person I am. I feel so happy about this. For 30 years I have struggled to feel good about myself and I can finally be at a place where I can say “Nope, it’s definitely you”lol…I am not a bad person and do not deserve to be treated as such, I might like you, but I like myself best =D 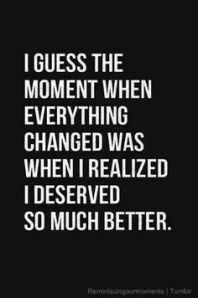