The Borg! Bet you didn’t see this one coming! Usually I write about love and my favourite characters (not that I hate the Borg or anything…well kind of do…but if you know, you know).

The Borg are a fictional race of characters in the television show and science fiction movie “Star Trek” (the ones with Patrick Stewart). As well as Seven of Nine in Star Trek: Voyager. (See picture below for example): 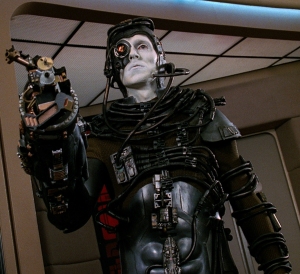 The Borg, I find, a quite terrifying alien race. They “assimilate you” and your thoughts and mind all become one with all the other Borg’s in the collective…For a well-known individual like myself, the thought of being a “one collective” is pretty terrifying! I had to admit though in the past (and kind of still present) there was a group that I belonged to that really remind me of the Borg…One thought…The Hive Mind

The Borg manifest as cybernetic-ally   enhanced humanoid drones of multiple species  organised as an interconnected collective, the decisions of which are made by a hive mind, linked by subspace radio. The goal…To achieve perfection…Or rather what the Queen deems “perfection”.

“We are the Borg. You will be assimilated. Resistance is futile.“